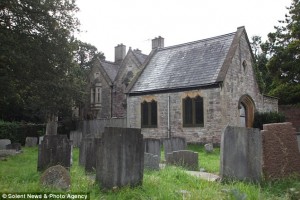 There are certain standards of behaviour for children deemed appropriate for practically every aspect of their lives but there is one form of etiquette that few adults know, let alone children. This came to light recently amid claims in Scotland that tourists had been having picnics on a war grave and many people were extremely upset about it.

It’s not always clear what behaviour is appropriate.
Recently in Wimbledon, South London, at the invitation of St. Mary’s Church, car owners parked their cars between the headstones which enraged locals and some residents are concerned that burial grounds will become self-appointed playgrounds for children.  The church charged £20 per day for tennis fans to park in the cemetery stating that since the graves were in excess of 200 years old there would be no living relatives to be offended. However, given the reaction of the general public the scheme was short lived!

Etiquette for Burial Grounds
Burial ground etiquette is defined by a number of things including local and national law, common sense and convention.

Governed by the Local Cemeteries Order (1977) of England, Scotland and Wales there is some legislation related to conduct. This includes creating a disturbance in a churchyard, committing a nuisance, wilfully interfering with burials or graves, or playing games or sports, all of which will incur a fine if proven. However, few members of the public realise they can be fined for these offensive activities and in some cases local laws (by-laws) can confuse the issue as they may be different depending on where you are in the country.

Nevertheless, most people have a basic understanding that respect should be shown whether you are a relative mourning a loved one or just a visitor to the cemetery for some other purpose. Unruly children

According to Peter Francis from the CWGC (Commonwealth War Graves Commission) behaviour in graveyards is mostly a matter of common sense. It’s expected that visitors will show respect, dignity and behave responsibly.

How children should not behave in burial grounds
It is inappropriate for children to play football in a cemetery or have a picnic for that matter, and whilst certain behaviour might be expected, many people do not know this or choose to ignore it. The CWGC wants to organise visits for schoolchildren to attend graveyards but few people are in favour of the plan.

Children should not chase each other round or climb over headstones. If they are there they should be encouraged to study the graves as a mark of remembrance or to learn something about history. The headstone or plaque represents a commemoration of a person’s life and children should be made aware of this.

The same code of conduct applies whether or not the churchyard is well kept or in disrepair, no matter how old the graves are.