The differences Prince William would have found in Japanese Etiquette 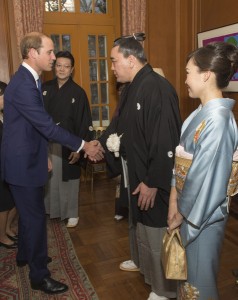 When you are travelling around the world it is always a good idea to do a little resarch about the etiquette of a country before you arrive. Etiquette varies widely from culture to culture. What may be perfectly normal in one country can sometimes be completely misunderstood in another; it may even be insulting.

When you visit a country, natives always appreciate if you have learned a little before you arrive about their language, their culture and their etiquette.

Slurping soup in Japan is considered polite
In Japan it is polite to slurp soup – if you did this in Britain you could get some long stares from shocked faces! If you leave rice in a bowl in Japan, it means you would like some more – if you did this in Britain people would think you have had enough to eat or you couldn’t manage it all, and you would not be offered more.

A weak handshake in Japan is good manners
Recently when Prince William visited Japan, he would have needed to spend some time learning about Japanese culture and etiquette. Although bowing is considered normal in Japan when greeting someone, a handshake is also acceptable which is why we would have seen Prince William shaking hands. The Japanese tend to give a very weak handshake and do not meet the eyes of the person they are greeting.

However when Prince William met Empress Michiko he both shook her hand and bowed; he did not look at her eyes or face, he lowered his eyes. His respect for her looked genuine and she gave him a very warm response and beautiful smile.

Etiquette in public
In today’s world people are more relaxed. However the Japanese imperial family is very formal when amongst the public. Prince William was much friendlier and open with the public in Japan than Crown Prince Naruhito was with his own people, but Prince William’s openness would not necessarily have caused offence. Prince William and Princess Katherine are a young generation of royals who work hard to be close to and informal with their public.

Prince William was very popular on his trip to Japan and he would no doubt have had subtle ways of conforming to the etiquette of Japanese culture. When entering houses he would have taken off his shoes. He may not have slurped his soup but would have undoubtedly done what was required of him to show his respect to the people and the country hosting his visit.

Our children are the diplomats and ambassadors of the future and we live in a multicultural society. It is therefore wise for children to learn at an early age some of the more important differences in international culture so that their behaviour will always be acceptable no matter where they are. For more information about our multicultural etiquette classes contact us particularly if you are imminently going abroad.