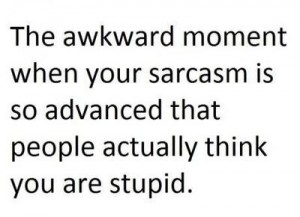 The greater the empathy skills of children, the easier it is for them to recognize sarcasm, according to a new study in the open-access journal Frontiers in Psychology.

For children, sarcastic language can be difficult to understand. They generally begin to recognize sarcasm between ages 6 and 8, especially familiar sarcastic praise such as “Thanks a lot!” and “Nice going!” But some children take much longer to begin to understand sarcasm, with detection improving even through adolescence.

In a new study, Penny Pexman, Juanita Whalen, and Andrew Nicholson investigated whether differences in the ability of children to empathize with others might help to explain why.

The researchers looked at empathy specifically because they thought that in order to understand sarcasm children must be able to adopt the perspective of the speaker — to understand the speaker’s attitude and emotions.

The study involved 31 children between 8 and 9 years old in a task that required them to recognize sarcasm. After children watched a series of puppet shows that included either sarcastic or non-sarcastic praise, they were asked to pick up a “mean” toy shark if they believed that the puppets had spoken sarcastically, or a “nice” duck otherwise. Each child was tested 12 times, with different puppets and scenarios. The empathy skills of the children were measured separately.

Children detected the puppets’ sarcasm about half of the time, and children with relatively strong empathy skills did so more accurately. Children with stronger empathy skills were nearly twice as accurate as children with less advanced empathy skills. Initially, the researchers analyzed a group of 6-7 year olds, but this age group revealed almost zero accuracy for sarcasm.

“Sarcastic language, especially in unfamiliar forms, is a real challenge for most children,” explains Prof. Pexman. “Even when children did not recognize a remark as sarcastic, there was evidence in their reactions that the children with stronger empathy skills were sensitive to the speaker’s intent.”

“This study helps us understand why some children deal better with this challenge than others and provides new insights about development of this complex aspect of emotion recognition,” adds Pexman. “It also puts us in a better position to help children who are struggling with this challenge.”