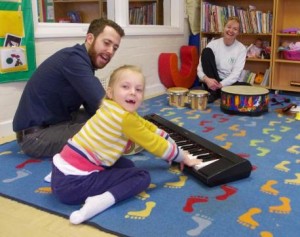 It’s great to hear that pioneering charity Jesse’s Fund has been nominated for the YCCA (Yorkshire Children of Courage Awards). Jesse’s Fund was founded by two musicians from York, Alan George and Lesley Schatzberger, when their daughter Jessica passed away due to a rare brain tumour that could not be operated upon.  Jesse’s Fund believes that “EVERYBODY has the right to communicate, and music can enable these children to, sometimes for the first time.”

The charity has been operating for almost 20 years and when it began music therapy for disabled and seriously ill children was not available in any British hospices for children.

Jessica died in May 1994 Wetherby, West Yorkshire at the Martin House Children’s Hospice and her Fund was initially started to raise money to send her to the USA where treatment was more advanced. Unfortunately, just 6 months after being diagnosed she died and therefore never made the trip.

Now the charity does outstanding work in special schools and children’s hospices throughout the UK.

Jessica’s mother has nothing but praise for the way Martin House Children’s Hospice cared for her daughter in the last days of her life but she felt that children could also be helped by being able to access music to provide them with another means of communication.

“It’s not about teaching them to play piano or flute, it’s about using instruments that are intuitive to play and sound good.”

Jesse’s Fund trains hospice staff in simple musical techniques as a method of communication with children. Its success cannot be denied considering the charity has worked in many special schools and 34 hospices for children.

“Most of all, it’s about participating in the music, not just listening and helping the children express themselves.” said Lesley Schatzberger. “With hospices, there is a very clear legacy from our work, as before we set up, there were no music therapists in children’s hospice. Now we have newer hospices get in touch with us when they are at the building stage to plan their music rooms”

“The children can benefit in so many ways. We’ve had parents tell us how much calmer their child is, how they can sleep at night for the first time.”

Music therapy can teach teamwork skills and boost self-esteem, but can also help physically, helping disabled children to use muscles they do not usually use, and helping with speech and language development.

“Music is a great motivator,” said Ms Schatzberger. “Whether it’s reaching out as far as they can to play a chime or beat a drum, or learning to take turns in a group. It’s just magic to see.”

£250,000 per year is required to run Jesse’s Fund and recently the charity received £2,500 for a project at Highbury School in Brighouse.

You can vote for Jesse’s Fund by visiting the YCCA website where, if you wish, you can also nominate a child for the Yorkshire Children of Courage Award. Voting will close on 10 October 2014, when the awards ceremony takes place.

If you want to attend the awards ceremony you can purchase tickets online from www.yorkshirechildren.co.uk and you can find more information about Jesse’s Fund online.

St James’s Place Foundation was founded four years ago for the purpose of honouring courageous children and raising cash for young people who are either disabled or disadvantaged.