Over protective parents do not enhance a child’s life skills 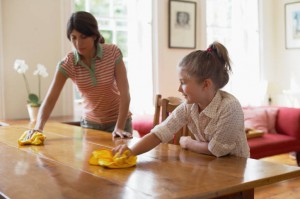 Many people might have noticed this weekend that Tesco have decided to place newspapers out of the eye line of small children so that only the front page headlines can be seen. This has apparently come about due to pressure from the “No More Page 3” and “Child Eyes” campaign groups.

Whilst this might be a good thing considering some of the things that appear on front pages of newspapers nowadays it does make me wonder whether we are generally becoming too over protective of our children.  Many young adults of today in their early 20s are desperately lacking life skills according to a recent study conducted by Sainsbury Finance.

Young adults including university students are so reliant on their parents it is quite alarming. For example, many don’t know how to cook having never tried to and 14% don’t have a clue how to boil an egg; their laundry is often still done by parents, they don’t do their own cleaning and often someone else does their shopping for them.

When to stop holding your child’s hand
This is not just confined to the UK. In the United States  university lecturers are bombarded by calls from parents complaining about the grades their children have achieved (or not as the case may be). Bear in mind this is not school, it’s university!  In addition, one in ten graduates from US universities wanted a parent to “hold their hand” at an interview for their first job. And amazingly, some parents actually complied!

When you consider the self-reliance prevalent in previous generations where perhaps our grandparents lived through a war and some of our parents were born during one, it’s astonishing to think that a young person who boiled an egg in their student lodgings in the 80s might be hailed as a champion of life skills when compared to the youth of today.

Over protection can fall into many categories and mainly concerns doing everything and anything for children who could in certain circumstances do those things for themselves.  Teaching them to hand wash clothes or how to operate the washing machine and showing them how to cook and clean will assist them immensely when they leave home, as almost all children do eventually.

Attempting to criticise teachers or professors in the grading of your child’s school work is not something that will benefit anybody.  If your child merited a grade A he or she would have been given one. It’s better to assist them with homework where possible and encourage more concentrated study.

Over protective parenting makes children more dependent, a trait that can be carried on throughout their lives according to psychologist, D Aaron Balick from Mindswork

Technology has played a huge part in the development of over protective parents. Before the advent of the internet most students would make one phone call per week to their parents from a payphone. Nowadays, they can text, email, call with the free minutes from their iPhones or chat for free with programs such as Skype and any number of social media platforms. It’s so much easier for children to remain permanently tied to their mother’s apron strings with access to communications technology.

Parenting is more difficult today
However, parenting is more difficult in today’s society when restrictions apply as to how we are allowed to discipline our children. Whereas a slap across the back of the legs might have stopped us throwing a tantrum in a supermarket the child of today is acutely aware that all eyes would be on a parent who did this nowadays and negative judgement passed.

Generally today’s society revolves around goals, targets and achievements making parenting almost a professional role.  And it’s not unusual for parents to question their own skills and lose self-confidence if their children don’t achieve top grades or fail in some other way.

Allowing children to take risk teaches self-preservation
So what is the solution to preparing our children for adult life? Allowing our children to take risks as appropriate to their ages would be a good start. If you consider that 80% of children aged between 7 and 8 were not supervised when walking to school whereas now, it’s only 12% of children aged between 7 and 10 years. In reality, there is no greater danger in allowing them to do this than there was in the 1970s and in doing so they learn the art of self-preservation when outside of the home.

In addition parents should learn to distinguish between the emotional support children need and the practical help they want.  For example, we can listen to their complaints about a teacher giving them a hard time because they didn’t complete their homework, but we should not then denigrate the teacher when it is indeed the child’s fault.

Life is generally about making mistakes and learning from them. If we don’t allow our children to make mistakes how will they cope out there in the big wide world if they fail at one thing or another?

To learn more about life skills, family coaching and how etiquette training can help children from an early age call me for an informal chat or email me with any specific concerns you may have.